If you’ve enjoyed the live music from The Old No. 5s at Volleyball Beach this summer, you’ll be excited to read more about them from our recent interview with the band. The Old No. 5s guitarist and vocalist Brock Alexander took a little time from his day to fill us in everything you wanted to know about the band and more! 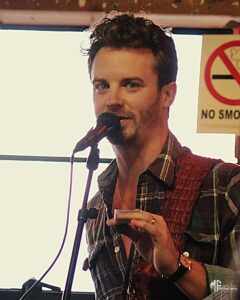 Brock Alexander – The Old No. 5s

Brock Alexander, band guitarist and vocalist, has been a part of The Old No. 5s since the band first started nearly 10 years ago. The lineup of band musicians has varied over the years and today Alexander is the only original member of the group but the high energy rock n roll vibes have remained consistent. Nearly 5 years ago as the band and its sound was evolving, Alexander recruited Adam Watson, a respected drummer and singer from a band with similar musical influences. And three years ago, the trio was completed when they met bass player Olie Bowden.

This Band’s Got Style!

The Old No. 5s sound started with steady repertoire of classic blues/rock covers from musical icons like Jimi Hendrix, Stevie Ray Vaughn, and Eric Clapton. Over time, the band’s vibe has broadened in range to include a spectrum ranging from country to blues to funk – regardless of the exact genre the band loves to crank up the rock n roll! The group balances a blend of classic covers and with their own originals, altering the 50/50 ratio to suit the audience. At Volleyball Beach, The Old No.5s tend to play more recognizable covers, tossing in an occasional original for the listeners’ enjoyment.

Originally, the band’s musical styling leaned toward Jimi Hendrix and the Beatles, but, according to Alexander, “You know, your tastebuds change.” For example, Alexander explained that he didn’t use to love the Grateful Dead, but as he’s changed and grown, he’s come to really appreciate their work.

Artists of any kind may feel stagnant after awhile, so it’s a healthy ability to grow and develop new interests and sources of inspiration. Musical inspiration and influence for The Old No. 5s can now be found “in anybody and everybody,” Alexander revealed.

What’s Next for the Band? 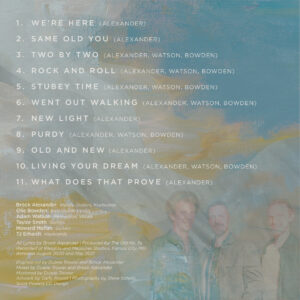 Exciting news: The Old No. 5s have just released their third album! While previous albums exclusively featured the band members’ own work, the new album also includes a few special guests! Guest performers on the album have all previously played along with the band live – enlarging the rock trio to either a four-piece or 5-piece lineup depending on the venue, the type of gig, the timing shows and other artist’s availability.

“At a live show, it’s been fun to see how the songs change flavor with the other guys involved,” Alexander commented. This is the first time, however, that guest artists have been invited into the studio to play and produce alongside The Old No. 5s on a recording.

The new album, titled “Moment to Lose,” was just released in August 2021 and, according to Alexander, “can be found anywhere and everywhere” from Spotify, to Apple Music, and even YouTube.

Volleyball Beach owner Howard Barewin was helping out in finding a band for an associate’ birthday party taking place in May this past year and a friend recommended The Old No. 5s. When Howard cold-called the band about the party, the band was happy to comply. “Have Gear, Will Travel,” laughed Alexander. After taking in the performance, Howard asked if the band’s might be interested in regular Sunday performances at the Beach and, as they say, the rest is history! As the weather warmed up and the summer of 2021 rolled around, the Old No. 5s could be found at Volleyball Beach nearly every other week. 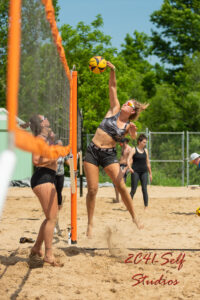 “There are times when you can tell people are there to play volleyball, of course,” Alexander answered. “The level of competition kind of determines the listening level.” The guitarist and vocalist explained that although Volleyball Beach is not their normal type of performance venue, it certainly has some great advantages. The chill atmosphere and relaxed environment provide a nice backdrop for the band. With such a low-stress vibe, the group is able to kick back and even have more fun – both with the audience and even among members as they continue exploring new music.

“One of the bartenders has a rum drink that really hits the spot during the summer,” Alexander remarked. The super refreshing drink – dubbed “Katie Juice” – was definitely a band favorite! Other band members substituted vodka for rum, and, in no time at all, Katie Juice and its vodka hybrid variation was 100% the official drink of The Old No. 5s!

Alexander shared a few talents he likes to use to entertain the crowd – including playing the guitar behind his back – or even with his teeth!

Another newly developed talent was calling out food and drink orders for the bar staff! Since the stage mike is louder than the bar staff’s, it became commonplace for staff to hand the band receipts to announce mid-show between songs. Alexander laughed that DJing food and drink orders was certainly a way to stay humble and a great reminder to never take yourself too seriously.

All in all, the good rapport between the band and staff perfectly complemented the relaxed, friendly environment Volleyball Beach embodies. 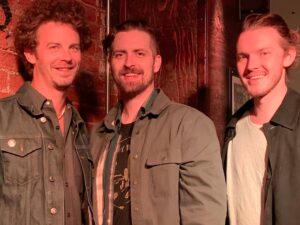 The Old No. 5s like to share with other audiences when they play other gigs that they’ve played at Volleyball Beach. Alexander said about 80% of the people at the other gigs will already know where Volleyball Beach is and a fair amount have already participated in matches at Volleyball Beach! For the other 20% who’ve not heard of Volleyball Beach, the band likes to describe the venue something like and extreme bowling league for outdoor volleyball – complete with drinks, food, and of course, lots of fun!

As summer winds down and the time to raise the winter dome for indoor play approaches, Volleyball Beach invites you to savor the last few days of musical fun in the sun! In fact, Sunday, September 26, 2021 is the last seasonal appearance of The Old No. 5s (from 3:30-6:30 pm).

Show up early to hear the band before your play session or stick around after to relax and enjoy the music! We’ll see you there!