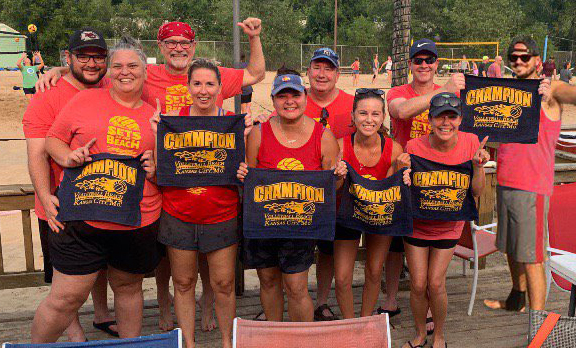 At Volleyball Beach, we love getting to meet the incredible people who make up our community. Staff, musicians, and players alike are all unique individuals with fascinating stories. Today, the Beach Spotlight has fallen upon KC native and Volleyball Beach regular Jennie Curry! Keep reading to learn more about this long-time regular and recent summer league winner. 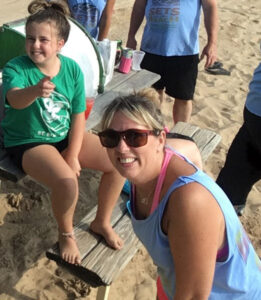 “Born and raised in Kansas City,” Jennie was quick to tell us. Clearly proud of her KC roots, this volleyball player hadn’t played much since grade school parochial leagues until she found herself at Volleyball Beach. Graduated from University of Central Missouri in Warrensburg, Jennie has a background in hospitality, and never lost her love for volleyball.

How Did You Find Yourself at Volleyball Beach?

A close friend of mine invited me to come play probably about 13 or 14 years ago, and so we started a team called “Sets on the Beach.” We just began playing, you know, recreationally – enjoying Sunday afternoon beers and the company and then playing volleyball, of course.

Then lately, with Covid and everything, this was something great for us. Being outside, being able to hang out – volleyball beach was something we could all look forward to. 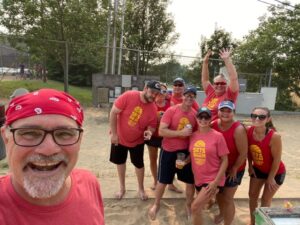 Jennie Curry and Team: “Sets on the Beach”

Tell Us About Your Current Team

Well, that girl friend who originally invited me out has since retired from the team because of a hurt ankle, so a few of the original members from the team have changed, but we’ve played with this current team for about 10 years now. We were never a super competitive team, though; we never even really discussed ever going for the winning towels….but then, as we played every summer, we just got better every season.

Our team is essentially a mish mosh of people bonded through volleyball over the years. At the end of the season, we always have an after-season party. We would love to play in the winter too, but some of us still have kids. It’s already hard to play in fall when school starts. We used to play spring and summer seasons but now we also play the fall season even though our schedules are busy because we just love it so much.

A lot of the team members are born and raised in KC too, so we have similar backgrounds and have known each other for years now.

A few years ago, probably around 2014, we decided to get matching shirts and now we have three shirts. The first year we got blue, then green, and after that, well, the Chiefs won the Super Bowl so we got red (we usually play in the red shirts). We’re all pretty excited about the shirts, especially because a friend on the team designed them! It’s extra fun because now other people can recognize our team and it’s fun to see the team show up every week in our shirts. I think we’re all super proud of our team, you know; we want to wear the shirts on Sunday nights. Nobody forgets!

We were so shocked to end up winning this past summer! I’m a little concerned Howard will move us to the B league now, because of the win, but not everyone is at the same skill level. That was our goal all along – to have fun, not necessarily to win.

I would have to say the atmosphere, yeah. You’re outside, everybody is having a great time…even the super competitive A and B teams have so much fun.

And it’s great to see the same people for so many years – even people not on our team! So many of the same people come back every year so you start to recognize the regulars; there’s a great sense of comradery.

Do You Show Up Early for Music or Stay Late After?

Sometimes we do both. We might head out [to VBB] for cocktails before the game. Someone will say, “Hey I’m headed out early, anybody want to join?” and usually at least a few of us will join early. Typically all of us stay after at least for one beer to catch up, though. We talk about kids, volleyball, just life – sometimes late into the night.  Everybody is always in, in, in! We have come to be very close and it’s amazing.

A Favorite Drink or Menu Item? 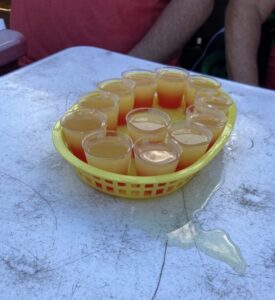 Chicken tenders and fries, for sure, or the Buffalo Chicken Wrap.

Everybody on the team drinks something different, but our favorite team shot is the Patrick Mahomes.

I have three kids and one dog “Winston.” The dog is just a baby still, he’ll be one year old this month. He’s a Lhasapoo, and he’s very excited and jumps all over everybody. My older daughter has played volleyball, the younger still plays. Our young son has seen so much volleyball now that at 8 years old he’s already serving overhand! All my kids are very well schooled in volleyball.

What Advice Would You Give VBB Newcomers?

I would say it’s a great way to spend time with your friends. If you have a group of friends who like to play but you think you’re not good enough to play, there’s room for everybody. You kind of find who the serious ones are and who aren’t and you play up to that – we really never have any issues with any other team. It’s always just a such good time.

I just love it out there and I wouldn’t have it any other way. 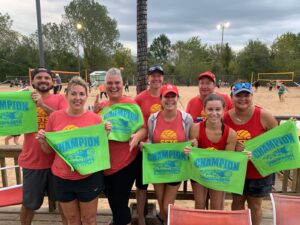 Congratulations once again to Jennie and the Team! After this fun interview about the team and their Summer 5 pm C League win, Sets on the Beach went on the win the Fall 5 pm C League as well!

Volleyball Beach wishes Jennie and Team a big congrats! All your individual effort and bonding as a team has really proved effective – most of all, we’re glad you love to go out and have a blast.

We’re so glad Jennie feels this way about our community! If you’re passionate about volleyball or just looking for a good evening out, Volleyball Beach is the right place for everybody! Take Jennie’s advice and stop by sometime soon! Winter registration is happening right now so be sure to sign up here and save your spot now!