Who says a number defines your true age? Charles Maudlin and the rest of his Kansas City Ski Club buddies have proven this to be false! In a recent interview with Charles, we found out more about him, his teammates and why they love playing at Volleyball Beach.

Members of the Kansas City Ski Club for the past 20-30 years, Charles and his buddies branched out from snow skiing and became active in cycling, softball, hiking, indoor volleyball and our personal favorite – sand volleyball! In the early 2000s, the guys – who got together weekly for guy’s night out – decided to form two sand volleyball teams at no place other than Volleyball Beach. Eventually, the two teams evolved into three – now there’s a total of 18 players on Thursday nights at 6:15! 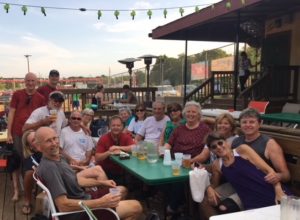 Out of the 18 dedicated players, 12 are 60-65 years old, 3 are in their early 70s and 3 in their early 50s. The secret to still playing sand volleyball at their ages? Staying active! “If you’re still moving, you can’t be dead,” said Charles when asked about the teams’ motto.

When asked about the teams’ names Charles said, “We wanted to have something so that if they announced over the speaker system our team names, people would take them as drink specials.” They decided on – $2 Shots, 2 for 1 Pitchers and Designated Drinkers! “We’re a bunch of characters,” Charles emphasized.

Once Thursday game nights roll around, the team uses a spreadsheet called, “The Randomizer,” to decide who will play on each team that evening. Three captains are selected for the night and the rest of the players are randomly spread throughout the three teams. So, if you play out at The Beach on Thursday evenings, don’t be surprised if you play a handful of the same opponents you were up against the previous week!

Be sure to say hi to Charles and the rest of the “characters” on your next Thursday night Volleyball Beach visit. As always, Free Play is open Monday-Friday from 4:00-6:00 pm with Happy Hour specials on drinks and apps. Come join the fun at Volleyball Beach!