The atmosphere at Volleyball Beach during the summer season is electric. Players and spectators alike enjoy fun drinks, ice-cold beer, delicious food, and spending time in the sun and sand together.  But one of the best parts of the summer season is the live music! If Sunday night isn’t your normal play night, that’s ok! Volleyball Beach invites you to come relax on the party deck and enjoy these local Kansas City bands as they jam out! 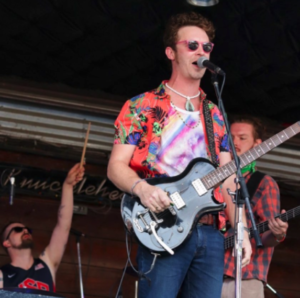 Upcoming Shows At The Beach

Howard Mahan is a guitarist, singer, and songwriter who is based out of Lawrence, Kansas. Live sets led by Mahan are dynamic – bringing a mix of original songs with deep-cut covers that range from rock to blues. Mahan is an expert at playing for the crowd, giving them a great mix of songs that match their energy and fit the venue perfectly. It comes as no surprise that his live sets at Volleyball Beach are always a big hit!

The Old No. 5’s are a top pick for live music at Volleyball Beach for their soulful blues and classic rock covers – songs that hit home for lots of people and ignite the energy at the Beach! But don’t worry, between their covers of much-loved hits, the Old No. 5’s show the crowd what they got with a few of their own originals that you’ll be sure to be humming till you see them again. If you’re a fan of Jimi Hendrix, Stevie Ray Vaughn, the Beatles, and Eric Clapton like the Old No. 5’s are, then you definitely won’t want to miss their jam nights at the Beach. Read more about the Old No. 5’s at Volleyball Beach here!

Nicole Springer is a singer-songwriter who has been called “one of the best voices in Kansas City!” Fans love her 3-octave range, and her musical style is best described as soulful folk-pop with unique hints of her gospel and country roots. Her live shows consist of a great mix of classic covers and moving originals. She’s been awarded a Pitch Music Award and will be releasing her newest album on May 21st! 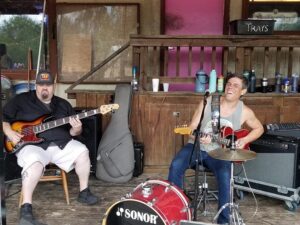 Nick Schnebelen is a touring American blues-rock musician from Kansas City, where he attended the Paseo Academy of Performing Arts high school and studied classical and jazz music. He was an original member of Trampled Under Foot and toured with Buddahead. He began his solo career in 2015, and his 2019 album Crazy All By Myself reached #13 on the US Billboard Blues Albums Chart. Blues-lovers will not want to miss his shows this summer at the Beach.

Mark your calendars so you don’t miss any of these exciting upcoming shows at Volleyball Beach!